At the Cross Road

Some prior articles on this site have looked back to see through the fog of the future. At this time as markets begin to swoon and talk of recession is increasing, there are conflicting reasons being offered for the current malaise:  The Trump Administration blames the Federal Reserve’s interest rate policy, while others point to the tariff war with China and a generally unsettled political background.

Talk of a recession is not idle chatter. Much emphasis has been placed on yield curves, which are a measure of interest rates over time using government instruments with maturities from one month to 30 years. Most times that the spread between 10- and 2-year Treasuries goes negative a recession follows. 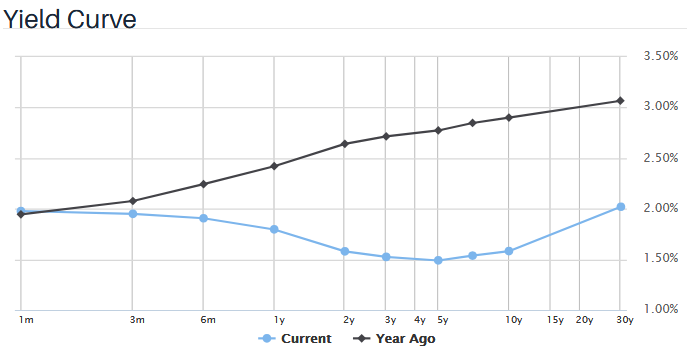 The Yield Curve chart above shows two lines. The upper line represents interest rate sentiments a year ago and the lower line depicts current sentiments at the time of this article. Under normal circumstances the longer investors are prepared to park their principal, the greater the reward to them in terms of higher interest rates. This is graphically demonstrated in the upper line of the chart as well as the Year Ago row in the table. If you were prepared to commit your funds for 10 years a 2.86% interest rate would apply, whereas a one-month T-Bill would yield 1.9% annualized. That is a positively sloped line which conforms to the norm: The longer your money is tied up the more you should be compensated. In fact in this scenario the difference is over 90 basis points, or almost one percent. (The 10-year benchmark is more commonly compared to the two-year rate, but the one-month parameter is used in this example for emphasis).

If we look now at the current rates, particularly the comparison of One-Month Treasury Bills and 10-Year Treasury Notes, we see that the 10-year investment is almost 40 basis points lower than the one-month security! In other words the short-term instrument is about four-tenths of one percent higher. How can that be, you ask. This is a phenomenon that occurs when investors lack confidence in the future of the economy and therefore flee to safety by buying government securities with a longer maturity. Ride out the storm, so to speak. The greater the demand for those longer term securities, the less the suppliers of these bonds have to pay by way of interest to attract investor funds.

So what is causing investors to feel uneasy about the US economy which has been doing well these last several years?

Some economists believe there is nothing wrong with the U.S. economy and that the bond market is simply being distorted by circumstances outside of the Country.  The European Central Bank (ECB) for instance, has a negative interest rate policy. Depositors pay for parking money. To the extent foreigners buy up longer term Treasury securities, that drives down long-term interest rates thereby causing the negative yield curve phenomenon observed recently.

Others point to America’s trade wars with China and the rest of the world. There are two arguments to be made:

National dialog has coarsened over the last few years, leading to a polarizing attitude among large segments of society. The Country is sadly lacking in sober leadership so desperately needed to restore a sense of certainty. Until this core element of the Nation is effectively addressed, measures designed to implement positive change might have limited success.

The economy goes where the people think it is going.